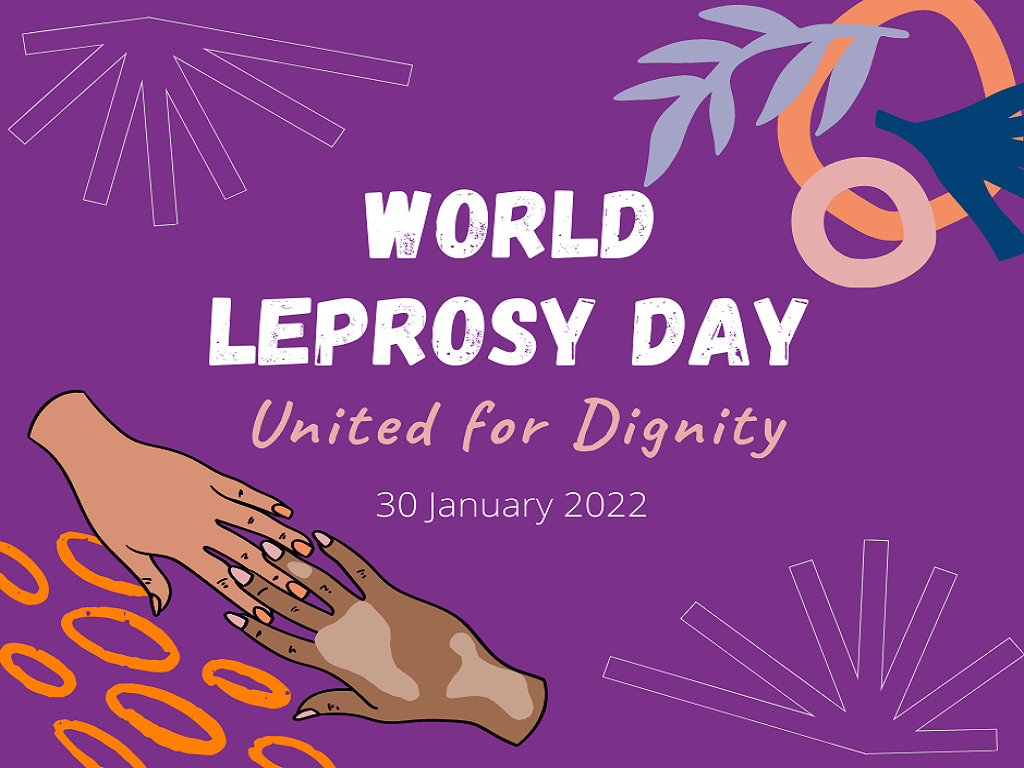 Leprosy is thought to have been eradicated, but still, many people are diagnosed every year with leprosy.

To raise awareness for leprosy, world leprosy day is commemorated every year on the final Sunday in January.

This date was chosen by Raoul Follereau, a French humanitarian, as a tribute to Mahatma Gandhi’s life, who worked extensively with leprosy patients and died at the end of January in 1948.

World leprosy day is dedicated to raising awareness about a disease that many people assume is no longer present. Today, the sickness and the people who have suffered through the disease have been forgotten.

Leprosy is a contagious disease that causes severe disfiguring skin sores and nerve damage in the arms, legs, and other body parts. Leprosy has existed from the beginning of time. In every part of the world and every country, people have been affected.

However, sometimes known as Hanson’s sickness, leprosy is not particularly contagious. You can only get it if you come close and repeatedly contact with a leprosy-infected person’s nose and mouth droplets. Leprosy is more common in children than in adults.

According to the World Health Organization (WHO), over 208,000 people worldwide are infected with leprosy, most of whom live in Africa and Asia. About 100 people in the United States are diagnosed with leprosy, predominantly in South California, Hawaii, and other US territories.

Leprosy primarily affects your skin and peripheral nerves outside of your brain and spinal cord. Your eyes and the delicate tissue lining the inside of your nose may be impacted as well.

Leprosy is distinguished by disfiguring skin lesions, lumps, or bumps that last for weeks or months. The skin lesions are pale in color.

Damage to the nerves can result in:

After coming into touch with the bacteria that causes leprosy, symptoms usually occur after 3 to 5 years. Some people do not show signs until they are 20 years old. The incubation period is between the contact with germs and the onset of symptoms. The long incubation period of leprosy makes it difficult for doctors to pinpoint when and where a patient became infected.

The Theme for World Leprosy Day 2022

“United for Dignity” is the theme for World leprosy day 2022. The campaign celebrates people who have lived with leprosy by sharing their inspiring tales and pushing for mental health and the right to live a dignified life free of disease-related stigma.

The following are the essential messages:

This day emphasizes the need to diagnose leprosy early, stopping associated deformities and disabilities caused by it and preventing the disease’s spread through negative leprosy-related attitudes and feelings.

There are also significant impediments to leprosy patients receiving the dignity and human rights they are entitled to.

There must be the elimination of discrimination against people affected by leprosy. Special attention should be paid to women and children affected by leprosy and have been victims of stereotypes, physical and verbal abuse, delays in diagnosis, and proper treatment and care.

Where is Leprosy Most Common?

Leprosy is most common in the tropics and subtropics, where it’s warm and humid. Over 200,000 new cases of leprosy were reported worldwide in 2017. The global prevalence is around 5.5 million with India, Indonesia, Myanmar, Brazil, and Nigeria accounting for 80 percent of cases.

In New Zealand, there were 38 instances documented between 2004 and 2013, with most cases originating in the Western Pacific or Southeast Asia, with the bulk of patients coming from Samoa. Every year in Australia, a small number of new topics afflict the indigenous population and migrants from endemic areas.

Armadillos are a significant cause of infection in Brazil and the United States’ southern states. M. leprae infection is widespread in people who hunt, kill, process, or eat armadillo meat.

The most effective strategy to avoid M. leprae infection is to prevent contact with droplets from untreated M. leprae patients’ nasal and other secretions. Patients treated with the appropriate antibiotics do not spread the sickness to others.

According to researchers, people living with untreated leprosy patients are eight times more likely to contract the disease because family members are near infectious droplets. Although leprosy is not passed down the generations, recent research suggests that vulnerability to the illness may have a genetic foundation.

Your treatment options are determined by the type of leprosy you have. Antibiotics are used to treat the infection. Doctors frequently recommend long-term treatment, ranging from 6 months to a year.

If you have severe leprosy, you may need to take antibiotics for a more extended time. Antibiotics are unable to repair the nerve damage caused by leprosy. MDT (Multi-drug therapy) is a typical leprosy treatment that includes antibiotics.

Anti-inflammatory medicines may also treat nerve discomfort and injury caused by leprosy. Steroids, such as prednisone, may be involved.

Leprosy is not preventable with a commercially available vaccination. However, there have been reports that administering the BCG vaccine alone or its combination with heat-killed M. leprae organisms and other preparations may benefit infection clearance and minimize treatment time.

Why is Leprosy Day Important?

World leprosy day is observed to raise awareness of a disease that many people believe no longer exists. Every year, 200,000 people are diagnosed with leprosy, and millions more suffer from the devastating effects of delayed leprosy treatment.

World leprosy day is a chance to honor individuals who have been touched by the disease and to promote awareness of the disease’s signs and symptoms.

Although discriminatory legislation against people with Hansen’s disease and their families no longer exists in America, stigmatization and discrimination exist in both high and low burden countries.

Discrimination by health professionals, educators, and the justice system has been reported in these countries. On world leprosy day, we urge governments to combat stigma, leprosy-related discrimination and enact policies that promote, protect, and respect the human rights of people suffering from leprosy and their families.

On the last Sunday of January, the international community advocates for the rights of those who have had Hansen’s disease. They join hands to battle the medical and social consequences of this tropical disease that is often overlooked.

World leprosy day is observed annually on January 30 in India, even though it is celebrated worldwide on the last  Sunday of January’s first month. The day is commemorated as an homage to Mahatma Gandhi. Mahatma Gandhi worked tirelessly to help leprosy patients find remission from their illness during his lifetime.

Educate people about Hansen’s disease and know that leprosy is a treatable condition. Multi-drug therapy (MDT), a combination of antibiotics, can treat leprosy. This treatment is provided free of charge all over the world. Leprosy can have significant consequences if it is not treated.

Leprosy is one of world’s oldest diseases, dating back at least 4,000 years. On the other hand, WHO believes that we can be the generation that ultimately ends leprosy transmission – the goal is zero transmission by 2035.

Leprosy is still a thing! Around 200,000 individuals are diagnosed with leprosy every year, and millions more suffer from leprosy-related disabilities, primarily in Asia, Africa, and South America.

Leprosy can be cured with a combination of drugs (MDT). If left untreated, it can cause lasting damage to the skin, nerves, limbs, and eyes.

Why Do We Celebrate Leprosy Day?

In 1953, French humanitarian Raoul Follereau chose to coincide leprosy day with the 30th anniversary of Mahatma Gandhi’s death on January 30, 1948.

World leprosy day is dedicated to raising awareness about a disease that many people assume is no longer present. Today, not only the sickness but also the people who have suffered through it have been forgotten.

When Did Leprosy Day Begin?

Raoul Follereau, a French philanthropist, put the foundation of leprosy day in 1954 on the last week of January.

What Is Leprosy Sunday?

Leprosy Sunday is the last Sunday of January every year on which leprosy day is celebrated to raise awareness against leprosy.

When is Leprosy Day Celebrated in India?

Every year on January 30, Mahatma Gandhiji’s martyrdom day, India commemorates leprosy day, as Gandhiji was firmly committed to the cause of leprosy. Since 2017, Sparsh Leprosy Awareness Campaigns (SLAC) have been held to honor world leprosy day to eradicate stigma and discrimination against leprosy patients.

Is Leprosy an Infectious Disease (accessible to contract)?

Hansen’s illness (leprosy) is a complex disease to contract. 95% of the adults are resistant to leprosy because their immune system can fight the bacteria which causes leprosy.

Is it Possible to Contract with Leprosy by Sitting Near Someone Who Has the Disease?

You cannot contract leprosy by casual contact with someone who has the disease, such as shaking hands, sitting next to, or chatting to them.

What is the Tradition of Commemorating World Leprosy Day?

The day is observed in both leprosy-affected and non-leprosy-affected countries. World leprosy day is celebrated by churches, NGOs, and leprosy champions in nations where leprosy is either non-existent or extremely rare, intending to raise awareness that leprosy still exists and is ruining lives.

Communities and persons afflicted by leprosy join together in places where the illness still exists to promote awareness and organize events to decrease leprosy stigma and promote awareness of the disease. Governments in several nations actively participate in activities with ministers commemorating the day.

Leprosy is an old disease with a long history of stigma. It is, nevertheless, a modern disease, with thousands of cases reported each year, including some in developed countries.

What appears to be a rash can turn into a dangerous bacterial infection that affects vision, and if left untreated, can lead to paralysis or the loss of feet and hands.

On world leprosy day this year, on January 30, we should unite to raise awareness for leprosy symptoms as its early diagnosis is the key to eliminating it.

We hope to raise public awareness about Hansen’s disease and reduce the social stigma associated with this perfectly curable condition on world leprosy day.