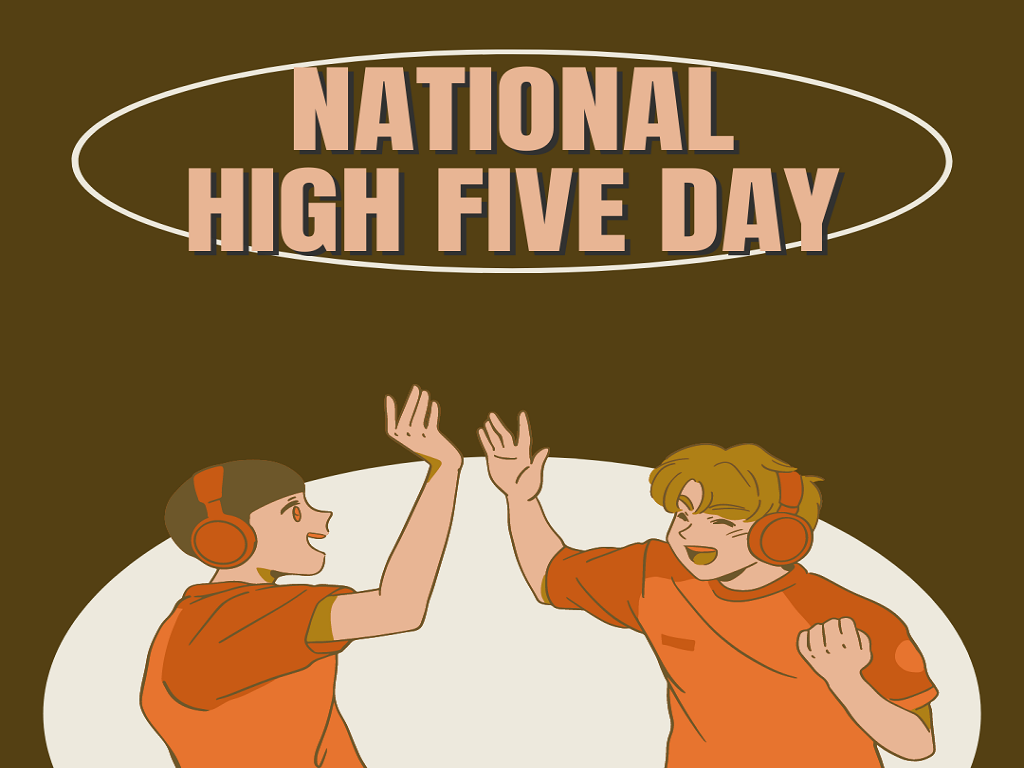 What is National High Five Day?

High Five is a gesture where people raise their hands high in the air and strike each others’ palms to congratulate, celebrate or to simply greet. This gesture soon became a celebration, and although it is an unofficial holiday yet many individuals celebrate it.

The national high five day 2022 is on 21st of April. You can mark this day on your calendar and start preparing yourself for the fun day. Go out on 21st April and give all the high fives you got to everyone around you.

While it is impossible to track down the origin of the high five in the history or the exact moment when it was invented, we know that it was inspired by the low-five, which was around from the time of World War 2.

There are two stories about the invention or origin of the high five, and both involve public display and celebration.

The first occurred in 1977, during the final regular-season game between the Los Angeles Dodgers and the Houston Astros. After scoring a home run, Dusty Baker was welcomed at home plate by teammate Glenn Burke. They both lifted their hands and slapped them with a high five to celebrate the play.

One more incident attributed to the very first known high five occurred during a practice of the Louisville Cardinals basketball team in 1978 when Wiley Brown was about to give coworker Derek Smith a low-five, but instead, they just high-fived, starting a new team tradition of giving one another high-fives as a way of celebration.

National high five day officially began in 2002 when students named Conor Lastowka, Sam Miotke, and Wynn Walent at the University of Virginia set up a stall on campus to give free lemonade and free high-fives to students. The idea was loved by many, and in no time it got popular. The popularity spread all over America and took the shape of a holiday that people love now.

In many parts of the world, the day is also marked as one of the cancer awareness days. National high five day is also used to celebrate their victory over cancer and defeat of care. It reminds us that we need to take good care of our loved ones and celebrate each day with them.

Many non-profitable organizations also use this day to organize fundraising events for children and adults suffering from chronic diseases. So, there are a lot of reasons to celebrate the national high five day.

National high five day has a lot of fun activities that you can do even as an adult.

On national high five day, please raise your hand high in the air and give a good high five to anyone you pass by and make their day fun.

Make a Kid Do High Five

No holiday is fun without kids. Teach the kids around you the art of high five, and then tell them to jump and give you a high five in the air. Teach them to say hi and celebrate every day with their hand.

A dog is a man’s best friend, and from the origin of the high five, we know that it was always celebrated between two friends. So, teach your dog to say hi with their paw. Teaching a dog is fun, and even on your bad day, a dog will cheer you up with a high-five.

Give a good high five to your crush or a stranger to start a conversation, and who knows that you might end up with a new friend or a date.

We use social media for everything now, so why not use it for some fun purposes. Make a video or a boomerang while giving a high five and make a viral high five video to make the day fun for everyone.

There is no holiday without some interesting facts. Here are some of the facts about the national high five days.

Why Does Everyone Love National High Five Day?

National high five day is a day when we celebrate our great fortune and have a nice time. It’s a day we should all remember and celebrate. It’s a day to be thankful for what we already have and to be who we are. It’s also a day to memorialize those who died because they never got to enjoy what they did.

We should be grateful for what we have and do our best not to lose that appreciation week after week. National high five day makes us feel grateful for everything we got and helps us celebrate the day without worrying about tomorrow.

Who holds the record for most high fives in a minute?

Kaiser Permanente in 2016 made a world record by getting 290 high fives in a minute.

Who holds the record for most high fives in 24 hours?

Pete Timbs from Australia holds the record for getting the highest fives in 24 hours. He got 14,607 high fives in a day.

Can you combine a high five with a low five?

Yes, people do combine a high five with a low five.

National high five day is a day when family and friends gather to celebrate healthy life, companionship, a sense of belonging, and, of course, joy. It’s a good day to say congratulations. Bless your friends and family, and let them know you’re thrilled and content.

The goal underlying national high five day is to spread the word by having an amazing time with family and friends. Seems hard to accomplish, but thanks to technological advancements, things are on the up. It will also serve as a day for doing good deeds without any selfish purpose and to serve the community with minimum effort.