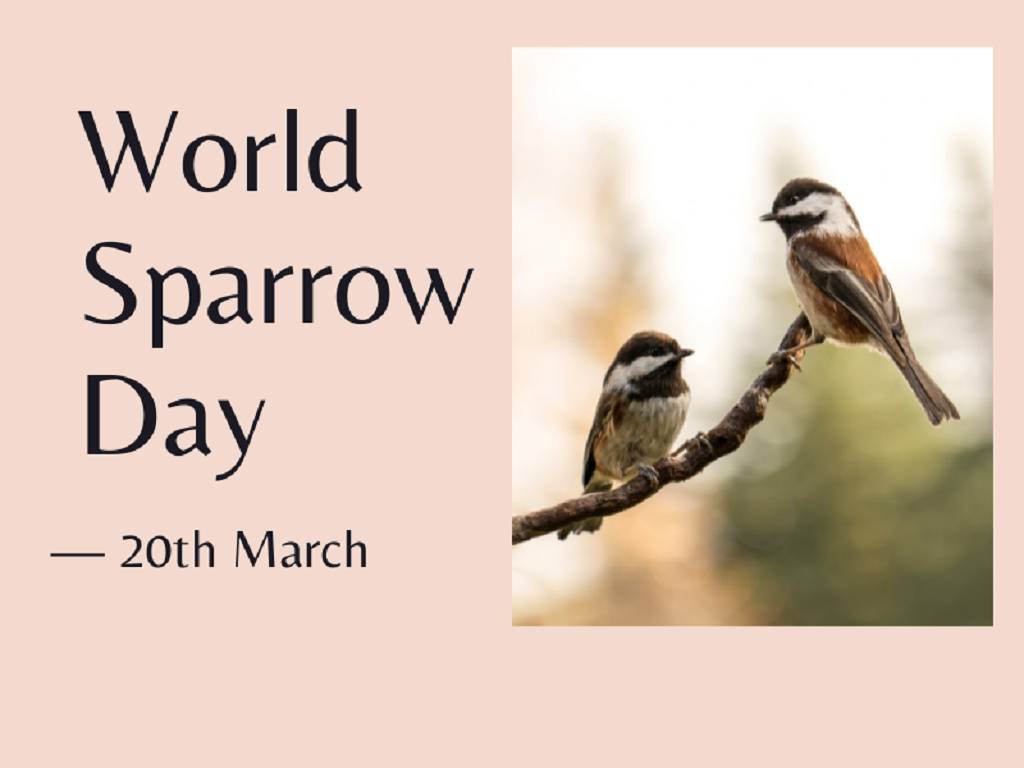 “I love sparrows” is the theme for world sparrow day 2022. The concept was motivated by the desire that more and more people recognize the importance of the human-sparrow interaction. After all, we’ve coexisted with these cute little birds for 10,000 years. So, the theme’s major goal is to showcase people’s passion for sparrows and the seemingly modest things they do to make a great impact in the lives of sparrows. Through this year’s topic, we hope to highlight how individuals from all walks of life are making remarkable improvements and showing their love for sparrows by telling the world how they are assisting in sparrow conservation.

People and sparrows are essential components of a connection that spans thousands of years. We have lost touch with particular sparrows and wildlife in general due to our hectic lifestyles. We wish to bring some outstanding people into the spotlight through this subject, people trying to save sparrows and promote love for sparrows, knowledge about their importance in our lives, and conservation suggestions. By looking at them, we hope that people may be encouraged to join the conservation movement to rescue sparrows by doing simple actions with considerable functional conservation significance.

Loving is being done. Warming up to sparrows entails more than simply appreciating them. It is about doing something for them that will assist them in combating modern threats to their existence. Sparrows rely on us for survival in this ever-expanding concrete jungle, and we rely on them to maintain the balance of our ecological system and, therefore, our very existence.

Every year on March 20th, world sparrow day is observed. It is a day to raise awareness and protect common house sparrows, becoming less numerous due to increased noise pollution and some unknown causes. The Nature Forever Society of India and the Eco-Sys Action Foundation of France co-founded world sparrow day. Mohammed Dilawar, a passionate conservationist, founded the Society. In 2008, Time named him one of the “Heroes of the Environment.”

On world sparrow day, we should urge the young nature devotees to love and care for the birds, especially as the hot summer season approaches and the birds, like us, want cool shade and drink.

What to Know About House Sparrows?

Sparrows are easily identified as bird species because they reside so near to people. Although this little bird is native to North Africa, it has been successfully brought to North America, Europe, Asia, Australia, and New Zealand. Unlike many other birds, sparrows do not live in woods or deserts.

The house sparrow (Passer domesticus) is probably one of the first birds you recall seeing as a youngster. Their nests could be found in practically every house in the neighborhood and public locations such as bus stops and train stations, where they lived in colonies and thrived on food grains and microscopic worms. Many bird watchers and ornithologists remember fondly how the house sparrow sparked their interest in birds. The house sparrow has been affiliated with people for millennia, and no other bird has been associated with humans daily like the house sparrow. It is a bird that recalls pleasant recollections, and it has been mentioned in folklore and lyrics since the olden days.

Unfortunately, the house sparrow is becoming extinct. Their numbers are dropping across their native area, like with all other plants and animals that were once numerous but are now facing an uncertain future. Certainly, there is no one known cause of the fall of the house sparrow. Its gradual but obvious disappearance has been dubbed one of the greatest mysteries of our time. A prominent newspaper in the United Kingdom – a country that has seen one of the worst decreases in house sparrow populations in recent years announced a $1,000 prize for anyone who could solve the riddle. The prize remains unclaimed.

There are several possible explanations for the fall in house sparrow numbers in metropolitan areas. These are some examples:

The concept for world sparrow day arose after a casual conversation over tea at the Nature Forever Society’s headquarters. The goal was to designate a day for the house sparrow to transmit the conservation of the house sparrow and other common birds and commemorate a day to appreciate the beauty of the common biodiversity that we take for granted. Nature, we must realize, does not provide a lifetime guarantee.

World sparrow day also has a larger goal of providing a venue for those working on the conservation of the house sparrow and other common birds to network, collaborate, and exchange conservation ideas, resulting in better science and better results. It intends to create a gathering place for individuals from all over the globe to join together and build a force that can play an essential role in campaigning and raising awareness about the need to protect common biodiversity or species with lower conservation status.

Organizations began working on this basic notion, connecting with people who love birds and other conservation partners. Many organizations have contracted with several national and international charities, several of which have agreed to publicize the event in their respective regions.

How to Celebrate World Sparrow Day?

According to wwfindia.org, sparrows reside in backyards and green patches in urban areas, but in the previous two decades, their population has been on the decline in practically every metropolis. On this world sparrow day, we urge youngsters and everyone to respect sparrow habitats.

It’s never too late to start learning. Along with training our children to keep a bowl of water and grains on the balcony for sparrows to dine on, we can also do things to encourage sparrows to visit us more frequently.

Take the youngsters on a sparrow walk

Early in the morning, go for a neighborhood sparrow stroll. Remember to bring binoculars and a camera.

Make posters and paintings of sparrows and other birds that frequent your balcony. This aids in the development of avian awareness.

If your workplace has an eco-club, you may plan a special event to honor sparrows on world sparrow day. You can display a video or documentary about sparrow conservation; offer talks to raise knowledge about the sparrow; and host activities such as sparrow treasure hunts, Hop-a-thons, photography contests, poster competitions, musical chairs, and so on.

Sparrows to celebrate your special day

If your children’s birthday or anniversary occurs in March, make it a sparrow-themed celebration. Sparrow theme parties might include fancy dress competitions, sparrow walks, sparrow movie screenings, sparrow activities such as treasure hunts, sparrow races such as Hop-a-thons, and so on.

Plant hedges and other plants in and around your homes with the assistance of children to attract sparrows to your bird sanctuary. Women may honor birds by hosting sparrow-themed cat parties and outdoor treks. They can hold potluck lunches, where each lady provides a home-cooked meal, and a relaxed get-together with games, where they can educate each other and watch sparrows.

Why is World Sparrow Day Important?

The sparrow, particularly the common house sparrow, is one of the most prevalent birds on the planet and one of humanity’s oldest friends. It has developed with us throughout time. Fortunately, they are still plentiful in many regions of the world.

The house sparrow was once the most common bird on the planet, but it has been declining over most of its natural range in recent years, both in urban and rural areas. The fall of the house sparrow is a symptom of the ongoing destruction of our environment. It also serves as a warning signal, alerting us to the potential negative impacts on our health and well-being. We need to understand the health dangers of rising microwave pollution and what is decimating the house sparrow population, which coexisted with us, so that we can assess the impact on all forms of life, including ours.

The house sparrow also symbolizes numerous popular bird species and ambassadors for them. As a result, conserving the house sparrow and its habitat will help conserve much of the common species that share the house sparrow’s environment. On world sparrow day, individuals and organizations can register with organizations to promote their events. The objective is to motivate others to join in the celebrations and get as many people as possible interested in protecting house sparrows and their habitats across the world.

The purpose of world sparrow day is to honor the event for a single day and utilize it as a platform to emphasize the importance of sparrow conservation and urban biodiversity conservation. We believe that world sparrow day will bring together people and national and international organizations. It will also aid in drawing the attention of government agencies and the scientific community to the need to conserve common bird species and urban biodiversity.

What is the significance of the sparrow?

Although sparrows are predominantly seed-eaters, they also consume tiny insects and worms such as caterpillars, beetles, and aphids. Sparrows control their number; otherwise, the insects would have devoured some plant species to extinction. Sparrows play a vital part in preserving the environment in this area as well.

Why are there fewer sparrows?

Factors such as urbanization, the substitution of ventilators with air conditioners in homes, radiation from mobile towers, pollution, insecticides and pesticides in fields, and the production of hazardous gases are the primary causes of the severe fall in the sparrow population.

In which country is the sparrow not found?

It is found natively across Europe, Asia, and North Africa. It has been brought to Southern Africa, and America Antarctica is the only continent that does not have it.

What is the total number of sparrows?

There are 43 different species of New World sparrows found in the United States and Canada (the family, Passerellidae, includes: towhees, juncos, and the lark bunting). The majority of birds with the word “sparrow” in their name are little and brown. Many have striped backs and conical bills that are ideal for husking seeds.

World sparrow day also has a larger goal of providing a venue for those working on conserving the house sparrow and other common birds to network, collaborate, and exchange conservation ideas, resulting in better science and better results.

It intends to create a gathering place for individuals from all over the globe to join together and build a force that can play an essential role in campaigning and raising awareness about the need to protect common biodiversity or species with lower conservation status.