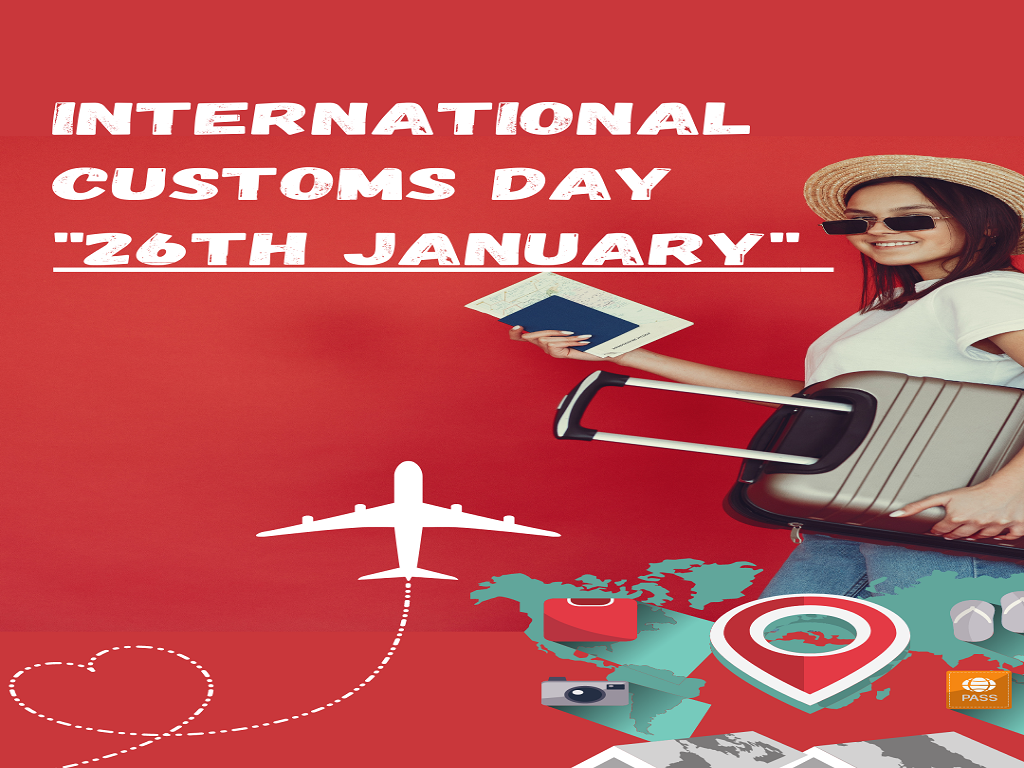 The International Customs Day (ICD) is celebrated on January 26th to honor customs officials and agencies. In simpler words, it is the day to commemorate the vital role of customs officials in handling the entire flow of goods across international borders. They ensure that world trade management is safe and secured. On this day, participating members of the World Customs Organization (WCO) also come forward to display their efforts and accomplishments

Customs is an agency in charge of collecting tariffs, or taxes on imported or exported goods. Customs officials monitor trade, as well as the movement of people and goods within a country. The agency also handles security at airports and borders. If you are considering crossing this border into another country, these officials help by maintaining security and safety.

The World Customs Organization is an international organization that develops, coordinates, and implements global customs law and has its headquarters in Brussels, Belgium. The main objective of the WCO is to make customs administrations around the world more efficient by promoting a simplified international trade system. Their primary mission is to provide leadership, guidance, and support to customs administrations according to their vision “to help make borders work”.

The World Customs Organization is dedicated to promoting cross-border commerce and collaboration through its international customs partnership, which provides guidance and support for customs administrations across the world. They believe that customs help to improve the economic, social, and environmental impact of goods moving from one country to another.

The History of International Customs Day

Europe has one of the biggest economies in the world. On January 26th, 1953, members from 17 EU countries attended a conference in Brussels. This foretold of Europe as a continent making global contributions and improvements in the public sector.

In 1983, the CCC created International Customs Day, which is celebrated on January 26th every year. That day marks the 30th anniversary of the first CCC session, which is now known as the World Customs Organization. Since 1994, it has been headquartered in Brussels and only handles international customs and border control matters.

How to Observe the International Customs Day

Major organizations host and conduct speeches, workshops, events for employee appreciation, and educational seminars on this day. These are the following activities you need to do to participate:

2020: Customs fostering Sustainability for People, Prosperity, and the Planet.

When is International Customs Day Observed each Year?

No, the day is a non-official holiday that businesses, schools, and government offices are open.

All About Custom Officials and Laws

Customs traditionally had two main responsibilities: conducting a customs assessment and collecting the relevant duties. They are also used in certain cases to prevent fraud when goods enter a country, or they might be there to allow imports and exports of certain goods. Commercial goods which haven’t been cleared, or those that need to be checked before release, are held in a bonded store. Authorized ports are usually recognized bonded stores.

September 11, 2001, terrorist attacks were a major factor in the strengthening of the security component in modern customs operations, following which security-oriented control measures for supply chains have been implemented to prevent the risks associated with them.

Customs are important, as they won’t let you leave once you clear them. Make sure to bring everything with you and enter the country in full compliance. They don’t allow passengers to leave the airport once they clear customs either.

If you’re trying to cross into a country to illegally and immorally exploit the labor, exploitation, or resources of that country, don’t get caught by the authorities. If you are found violating the law in this manner, you will likely be sent back to where you came from. The movements of people into and out of a country are normally monitored by their immigration authority, mainly customs officers.

Immigration authorities ensure each person entering the country is entitled to enter, apprehend people wanted by domestic or international arrest warrants, and separate people who might be dangerous.

The World Customs Organization has published guidelines for customs security functions to help companies prepare for its implementation. The custom duty managers should look into these standards before proceeding. The guideline is called SAFE and has had five editions in 2005, 2007, 2010, 2012, and 2018, respectively.

Customs have been streamlining the import and export of goods to reduce trade transaction costs. The contemporary understanding of the “trade facilitation” concept is based on Recommendation No. 4 of UN/CEFACT “National Trade Facilitation Bodies.”

Customs procedures in many countries vary. Some may fall into one or the other of two color-coded categories, red & green.

Entry into a channel constitutes a legal declaration. If someone making entry under the “green” channel is found carrying goods that are either above or beyond the customs limits, he/she will be subject to prosecution for making false declarations to customs. There’s no return once you enter any of the different ferry channels.

Some airports in Australia, Canada, New Zealand, and the United States do not operate a red/green system. However, they have adopted this concept in recent years.

Customs duties do not apply when traveling from EU to EU. So, passengers don’t have to avoid any customs headaches before or after your trip! Value-added tax (VAT) and excise duties may be applicable if the goods are transferred, but these are collected at the border when goods are sold.

All airports in the UK operate a channel system, but some do not always have red & green channels. The red point phone serves the same purpose instead.

The European Customs Union includes customs duties and restrictions. You can select between €22 and €150 for custom duties and taxes. Be sure to check out the individual regulations from all member states. The single administrative document is used as a basis in different countries across the EU. It’s used to make customs declarations more convenient for people traveling internationally.

For goods in Germany under €22, there is no tax and you don’t need to worry about customs or VAT. Above that amount, taxes and customs are necessary. Customs may be very strict, especially for goods shipped from anywhere outside the EU. However, some of the customs fees are reimbursed for up to €10 goods/package when shipping within the EU region

As a business person, you may have noticed the increase in customs fees when importing goods from external countries, even if you already paid the VAT to your country of origin. Customs officers often charge customs duty on imported goods in order to make up for a loss of revenue. This is due to the costs of the duty usually not being passed onto the customer in Italy.

The Czech Republic and Slovakia

From €22, you’re completely tax-exempt. At €150, customs may range from zero to 10%. Also, there are certain fees when importing goods in the Czech Republic and Slovakia.

Ukraine has had a new reform in 2019 when the State Fiscal Service was reorganized into the State Customs Service. Customs have been one of the oldest government procedures and are being digitized with EU Customs reforms. There are many other areas where customs interact with the business community like market-level wages, innovative customs checkpoints, an open reference database of inspections, and integration into the EU trade community.

The United States of America

To ensure compliance of all people, and specifically those entering the United States, CBP officers are responsible for certain checks to ensure that there are no issues before anyone enters or exits the country. This public service is administered each day to screen out and keep undesirable people from entering the US. Travelers are screened for prohibited items including; gold, alcoholic beverages, firearms, and soil. Employees who don’t adhere to their company’s health and safety policies risk facing penalties, which vary in severity according to the rules that were broken.

In the U.S, average customs duties for goods imported are 3%. Duty is levied, paid by the importer of record, and individuals may be exempt from duty on a limited amount of purchases and goods temporarily imported (such as laptops) under the ATA Carnet system.

Customs rules are different from other import restrictions. Failure to comply with customs rules can result in seizing and civil or criminal penalties against involved parties. Customs and border protection exists to ensure that all goods entering the US comply with regulations. Most of these shipments go through customs without any problems, but anything that is found to be mislabeled or carrying illegal goods will undergo a thorough inspection, at which time the CBP will use their expertise and ask for any assistance it needs.

Uruguayan customs place a limit of 3 packages to be imported with a nominal value of $200. If you want more than that, then you will need to pay the appropriate fees.

For 3 free packages to be included, the addressee will have to register them at the Uruguayan Postal Service and link their tracking code, address & national ID number. The person can also share a phone number & email address.

Because of the strict customs laws at this airport, goods valued up to US$500 brought in by plane and up to US$300 by sea or land are free of duties and taxes. (cellphones & laptops are also duty-free regardless of value).

Clothing and other items may require a weight-based duty fee determined per item but worth less than this amount. Above those values, taxes are 50% of the value of all the obtained goods.

Conclusion– An Honor to the Custom Officials

Indeed, the customs officials work day and night with sharp security to ensure the safety of our country. Hence, they deserve to be honored and celebrated on International Customs Day.