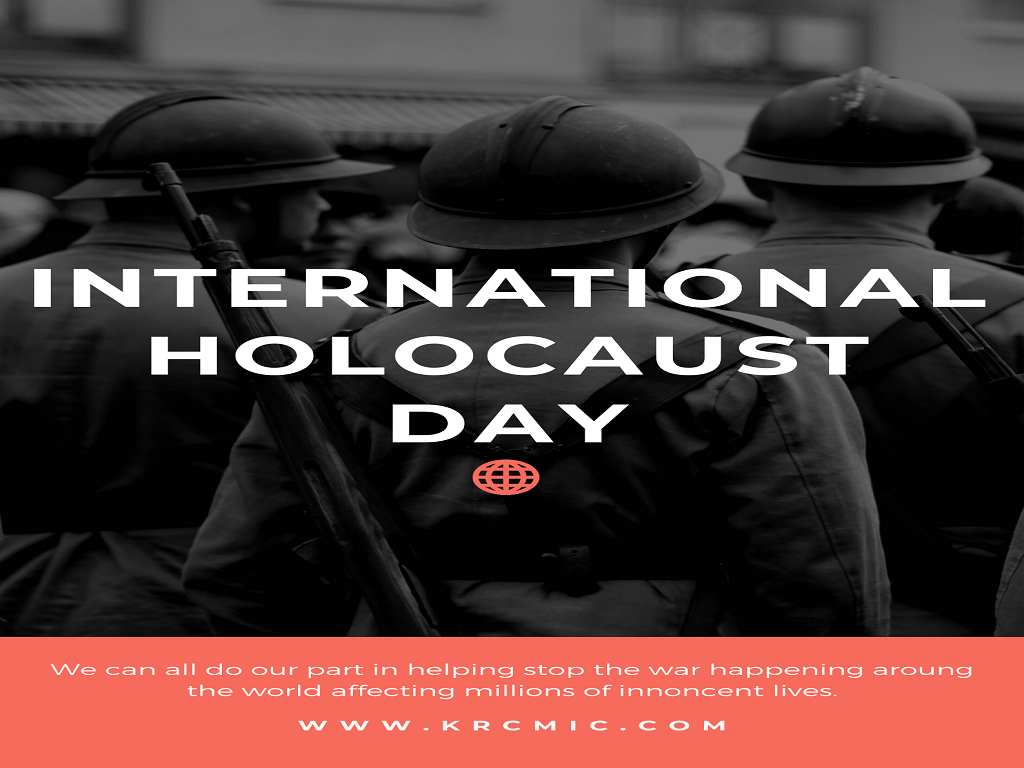 The world is full of unjust History, and the Holocaust is a prime example. The Holocaust was the systematic persecution and murder of six million European Jews by the Nazi German authority, allies, and accomplices.

Between 1933 and 1945, a series of events known as the Holocaust unfolded across Europe. International Holocaust Remembrance Day is celebrated on January 27 of every year to pay tribute to the innocent victims of the Holocaust by Nazis.

The Holocaust was state-sponsored persecution and murder of six million European Jews by the Nazi German regime and its allies and collaborators from 1933 to 1945. The Holocaust occurred between 1933 and 1945, according to the United States Holocaust Memorial Museum.

The Holocaust began in Germany in January 1933, when Adolf Hitler and the Nazi Party came to power. When the Allies defeated Nazi Germany in WWII, it came to an end in May 1945.

When the Nazis took control in Germany, they did not immediately begin murdering people. However, they swiftly began to use the government to target and expel Jews from German society. The Nazi German dictatorship imposed discriminatory laws and orchestrated violence against Germany’s Jews, among other antisemitic tactics.

Between 1933 and 1945, the Nazi persecution of Jews became more virulent. This radicalization culminated in a plan known as the “Final Solution to the Jewish Question” by Nazi officials.

The “Final Solution” was the wholesale extermination of European Jews organized and methodical. Between 1941 and 1945, the Nazi German regime carried out this Holocaust.

Why is the Holocaust Remembrance Day important?

To pay tribute to the millions of people who have died or had their lives altered due to genocides. While it may appear that something as heinous and massive as the Holocaust could never happen again, survivors want us to know that it can, which is why we must remember the atrocities they endured.

So That History Doesn’t Repeat

History has a way of repeating itself, and it’s usually tragic. We must remember what happened and why and how it happened if we do not want to go backward. We must remember people who have suffered for years due to anti-racism on this day, commemorating one of the most brutal and heart-wrenching atrocities in contemporary history.

On Holocaust remembrance day, we must take an oath to end antisemitism, anti-racism, and all other forms so that our future generations don’t suffer from such injustice and keep our world a happy place free of discrimination.

As a result, the international Holocaust remembrance day is a day to reaffirm our commitment to human rights.

We must go beyond remembrance to ensure that future generations know our history. The Holocaust’s lessons must be applied to today’s world. And we must do all possible to ensure that all people have access to the protections and rights that the United Nations stands for.

The UN resolution calls on member countries to “create educational programs that will instill the lessons of the Holocaust in future generations to  prevent future crimes of genocide.”

The UN rejects “any denial of the Holocaust as a historical event, in whole or in part,” and “condemns without reservation all manifestations of religious intolerance, incitement, harassment, or violence against persons or communities based on ethnic origin or religious belief, wherever they occur,” according to the document.

Why did the Nazis choose Jews as a target?

Because the Nazis were virulently antisemitic, they attacked Jews. This implies that they were antisemitic and despised Jews. Antisemitism was, in fact, a central pillar of their philosophy and the bedrock of their worldview.

The Nazis wrongly claimed that Jews were responsible for Germany’s social, economic, political, and cultural woes. They blamed them in particular for Germany’s defeat in World War I (1914–1918). These Nazi assertions were taken seriously by some Germans. Anger at the war’s loss and the ensuing economic and political difficulties fueled rising antisemitism in German society.

Many Germans were more susceptible to Nazi views, especially antisemitism, during the Weimar Republic (1918–1933), due to the country’s instability, fear of communism, and the economic shocks of the great depression.

Antisemitism, on the other hand, was not invented by the Nazis. Antisemitism is a long-standing and widespread prejudice that has manifested itself in various forms throughout history. As Europe became more secular, most legal prohibitions on Jews were eliminated in many locations. This did not, however, signal the end of antisemitism. Other varieties of antisemitism emerged in Europe during the 18th and 19th centuries, in addition to religious antisemitism.

The Nazis saw Jews as a menace who needed to be expelled from German society. Otherwise, the “Jewish race” will forever corrupt and destroy the German people, according to the Nazis. Many people who identified as Christians or did not follow Judaism were included in the Nazis’ race-based definition of Jews.

How the Holocaust ended?

When the principal allied powers (Great Britain, the United States, and the Soviet Union) conquered Nazi Germany in World War II in May 1945, the Holocaust ended. Allied forces overran concentration camps as they marched throughout Europe in various offensives.

The surviving inmates, many of whom were Jews, were rescued there. Survivors of so-called death marches were also discovered and released by the allies. These forced marches were made up of Jewish and non-Jewish concentration camp inmates evacuated on foot from facilities guarded by the SS.

However, emancipation did not bring an end to the story. As they attempted to rebuild their lives, many Holocaust survivors faced persistent threats of violent antisemitism and displacement. Many people had lost family members, and others had been looking for them for years.

What happened after Holocaust?

While the war brought an end to the Holocaust, the legacy of horror and genocide did not. Six million Jews were killed in World War II. Thousands of Jewish communities across Europe were decimated or annihilated by Nazi Germany and its allies and accomplices.

Those Jews who survived the Holocaust were frequently confronted with the devastating reality of having lost their entire families and communities. Some people were able to return home and restart their lives in Europe. Because of wartime violence and antisemitism, many others were hesitant to do so. Those who could not return home in the early aftermath of the conflict typically found themselves living in displaced person camps.

Was there a cover-up of the Holocaust?

The Holocaust was no longer a taboo topic in Europe. Many Europeans were aware that Jews were being gathered up and shot, or deported and murdered, despite the Nazi government’s control of the German press and refusal to publish large shooting operations or the existence of killing sites. Many people in Germany and collaborators in Germany’s occupied or allied nations during WWII actively engaged in the stigmatization, isolation, poverty, and brutality that culminated in the mass murder of six million European Jews.

Many bystanders who observed persecution or violence against Jews in Nazi Germany and elsewhere did nothing to help their neighbors, classmates, and coworkers become isolated and impoverished—socially, legally, and later physically. Only a small number of people publicly expressed their displeasure. Other people helped the victims by buying food or other family supplies and providing false identity papers or warnings about upcoming roundups. Storing belongings for those in hiding that could be sold off piece by piece for food and sheltering those who evaded capture, a form of help punishable by arrest and often execution if discovered, especially in Nazi Germany and occupied Eastern Europe.

When is Holocaust remembrance day celebrated?

Holocaust remembrance days have been established in several nations. Like the UK’s Holocaust memorial day, many occur on January 27, while others, like Israel’s Yom HaShoah, occurs at other periods of the year.

Why is January 27 Holocaust memorial day?

It is commemorated on January 27 because on this date in 1945, soldiers battling the Germans took control of the largest Nazi concentration camp, Auschwitz-Birkenau, and liberated the last captives.

When is Holocaust day in Israel?

Yom HaShoah begins at sunset on the 27th day of the month of Nisan and ends the dusk of the following day, according to the Hebrew calendar, in keeping with the Jewish custom of marking a single day.

Nisan is the first month of the Jewish calendar, according to the Torah, the first section of the Jewish Bible, and corresponds to March and April on the Gregorian calendar.

Israel commemorates Yom HaShoah with a state ceremony at Yad Vashem in Jerusalem, Israel’s official memorial to Holocaust victims, on the evening of the 27th day of the month of Nisan.

What is the definition of a death camp? What was the total number of attendees? Where did they end up?

Every year on January 27, UNESCO remembers the Holocaust victims and underlines its unshakable commitment to combat antisemitism, racism, and other kinds of intolerance that can lead to group-targeted murder.

The date commemorates the liberation of Auschwitz-Birkenau, a Nazi concentration and extermination camp, by Soviet troops on January 27, 1945. The United Nations General Assembly declared November 5, 2005, as International Day of Commemoration in memory of the Holocaust victims.

The Holocaust had far-reaching ramifications in the nations where Nazi crimes were committed and in many other regions of the globe. Seven decades after the genocide, member of the states share a joint duty to treat residual trauma, maintain effective commemoration policies, care for historic sites, and support education, documentation, and research.

This role includes educating young people about the causes, repercussions, and dynamics of such atrocities to improve their resistance to hate ideologies. This has never been more important than now, as genocide and atrocity crimes continue to occur across numerous countries, and we see a global rise in antisemitism and hateful ideologies.