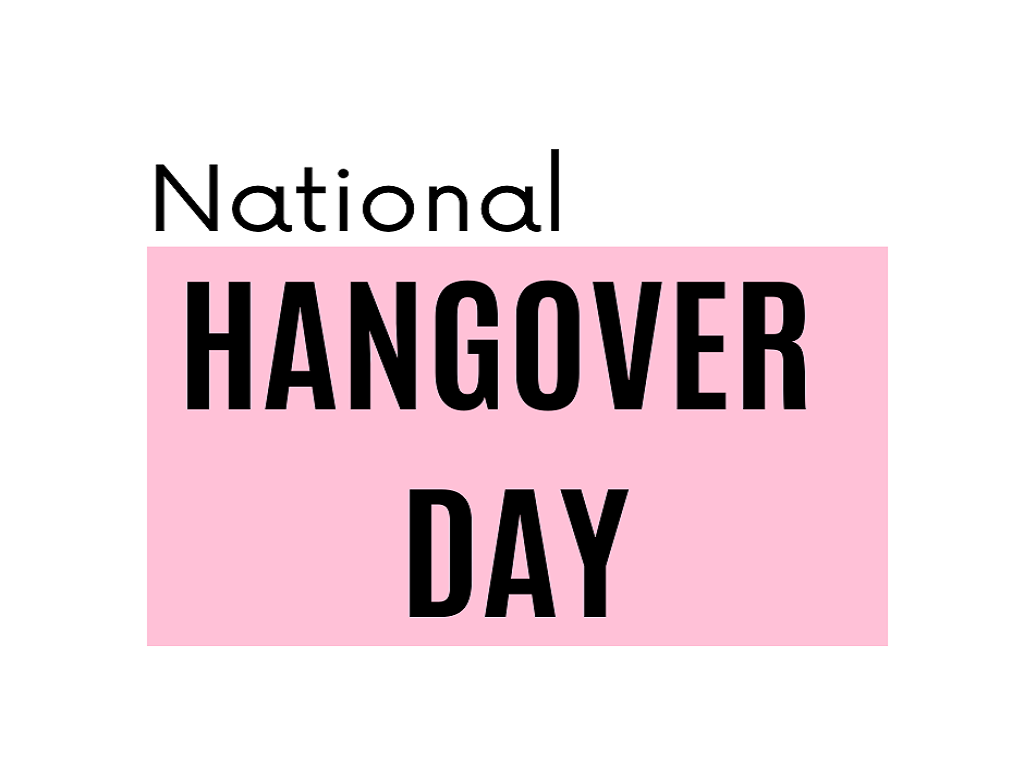 When is National Hangover Day?

National hangover day is observed on January 1st which tends to the hurting heads of all of us who overindulge on New Year’s Eve each year.

New year is a time to enjoy to the fullest to waive off the tiredness of working continuously for a year. Most people get themselves hungover on this day by drinking too much. If you went all out for new year’s eve, you’d be relieved to learn that January 1st is national hangover day.

Fortunately, this day falls on new year’s day, as it allows folks to stay at home and nurse their headaches.

Although beginning the year with a hangover is not great. This day reminds those who have hungover that they are not alone. Although national hangover day is not a federal holiday, it happens on the same day as New Year’s Day. Therefore businesses and schools are closed.

People were chatting about national days at a get-together in October 2015 at the Oven and tap, Bentonville, Arkansas. The discussion then moved on to which days on the calendar have little or no national days associated with them. When it was announced that January 1 would be known just as new year’s day, Keegan Calligar and Marlo Anderson both said it should be national hangover day at the same time.

In October of 2015, Keegan Calligar and Marlo Anderson proposed a national hangover day. In November of 2015, the registrar of the National Day Calendar® approved this day.

National hangover day is a day to figure out how to feel better after drinking too much. Although there are many proven techniques to avoid and treat hangovers, on national hangover day, people take to social media to post their homemade hangover remedies.

What Exactly is Hangover?

A hangover is a group of symptoms that develop due to excessive drinking.

A night of drinking for many people can result in a painful morning after and the dreaded effects of a hangover.

What Are Some Symptoms of Hangover?

Alcohol is a poisonous substance. Toxins of alcohol are metabolized at a specific rate by our bodies. We become inebriated when the rate at which we consume food surpasses the rate at which our liver can process it.

The chance of getting a hangover increases significantly as well. The toxic chemical acetaldehyde is produced by the liver breaking down alcohol. Glutathione is one of the molecules produced by the body to combat harmful poisons. Because glutathione is a stimulant, we become weary when it is consumed.

Alcohol is a diuretic. Thus it might cause headaches or muscle aches. Aches and pains, as well as the unsettled stomach mentioned before, are all symptoms of dehydration.

While drinking, people may feel calmer, more relaxed, and even euphoric, but as the brain seeks to maintain equilibrium, it soon adjusts to itself. As a result, folks may become even more restless and agitated after the high wears off than they were before.

The stomach lining is irritated by alcohol, which causes acid production. This can result in nausea as well as stomach discomfort.

Alcohol causes inflammation in the body. Inflammation plays a role in the comfort that people experience when unwell. Thus it could also be a factor in hangover symptoms.

Even though many hangover treatments have been mentioned on the internet and social media, none have been scientifically proven helpful. There is no magic cure for hangovers; the only thing that can help is time.

A person must wait for the body to eliminate the toxic byproducts of alcohol metabolism, re-hydrate, repair inflamed tissue, and restore regular immunological and brain activity. A hangover cannot be cured by drinking coffee, showering, or having an alcoholic beverage the next day.

To avoid hangovers, some people take over-the-counter pain medicines (usually acetaminophen) before bed. It’s crucial to understand that combining alcohol and acetaminophen can harm the liver.

Certain over-the-counter pain medicines, such as aspirin and ibuprofen, can increase acid production and irritate the stomach lining, similar to alcohol. When using these medications before or after consuming alcohol, use caution.

Some people use electrolyte-rich sports drinks or other products or even intravenous (IV) therapies to address electrolyte imbalance induced by increased urination and fluid loss due to drinking to alleviate hangover symptoms.

What to Do on National Hangover Day?

Drinking plenty of water throughout the party and refilling fluids afterward can help alleviate hangover symptoms. Try re-hydrating with water, fruit juices, or sports drinks. These will help you hydrating your body and recover from low blood sugar by replacing electrolytes that have been depleted. According to studies, alcohol use has been linked to increased insulin.

Make sure you have some hangover cures on hand

Stock up on necessities to help you feel more like yourself after a night of partying. Whether it’s sports drinks, fatty potato chips, or antacids, make sure you have them on hand.

Why not arrange a party if you’re feeling particularly ambitious? After all, a fantastic Bloody Mary could be the answer to your hangover.

Take a sip of Pedialyte.

Of course, this wasn’t created to aid with hangovers, but it might. The drink intended for youngsters can replenish minerals and electrolytes that your body needs to feel better.

Why is National Hangover Day Important?

Let’s face it, going about your daily routine while suffering from a bad hangover may be downright depressing. National hangover day is the ideal excuse to eat fried food while nursing that pounding headache.

A hangover isn’t something that happens out of nowhere. If you’re suffering from a hangover, chances are you had a wonderful time the night before. While a hangover may appear to be a curse, it’s also a gentle reminder that you’re a fantastic party animal.

During one of our holiday research projects, we discovered some fascinating facts about hangovers that we thought our readers might like. There are a few things that people should be aware of when it comes to the ordinary hangover.

How did national hangover day start?

In 2015, a group of friends from Arkansas founded this day. They began discussing national holidays while dining together at a restaurant and how certain days have so many holidays associated with them. They quickly realized that January 1 was only recognized as new year’s day, making January 1 national hangover day. In November of 2015, the official proclamation for this day was approved.

How long does a hangover last, and when does it peak?

Hangover symptoms peak when the body’s blood alcohol concentration drops to zero. Symptoms can linger for up to 24 hours.

Is a hangover dangerous or just inconvenient?

Hangovers can be uncomfortable as well as harmful. A person’s attentiveness, decision-making, and motor coordination can all be affected by a hangover. Additionally, the ability to perform critical duties such as driving, managing machinery, or caring for others may be harmed.

Is it possible to have a hangover for the entire day?

In most cases, hangovers subside within 24 hours. An all-day hangover is what it’s called, and it usually goes away on its own. Some hangovers, though, can persist even longer. A hangover can last anywhere from 48 to 72 hours and is referred to as a two-day hangover.

Does hangover have anything to do with DNA?

According to a new Australian study of twins, some people have hangovers after a night of drinking, while others don’t, and the difference could be down to their genes.

Researchers searched for correlations between study participants’ genetic makeups and the number of hangovers they had in the previous year.

According to the findings, genetic factors accounted for 45 percent of the difference in hangover frequency in women and 40 percent in males.

In other words, the study found that heredity accounted for about half of the reason why one individual gets a headache, and another does not despite drinking the same amount of alcohol. The other half is most likely due to non-genetic factors such as how quickly a person drinks, whether they eat while drinking, and their tolerance for alcohol.

If you find yourself hungover on this day, keep some of the remedies listed above on hand. Keep bananas, eggs, and water on hand, and get as much rest as possible. Contrary to popular opinion, painkillers should be avoided because they will only make you feel worse.

Consider assisting your partner or buddies with their hangover if you were responsible and didn’t drink last night. Bring them food and water, and spend the day on the couch with them.

Have you got any stories regarding your hangover day experience? Then share it in the comments below 🙂