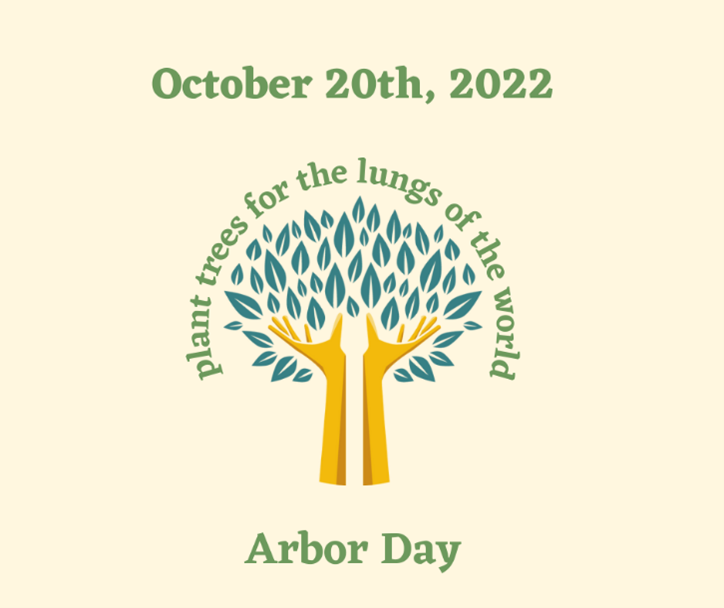 Trees, and the greenery that surrounds us in general, are often seemingly invisible to us, but extremely important to our lives. Not only do they produce oxygen, the presence of trees provides shade, helps cool cities in summer, and the presence of greenery has also been shown to improve people’s mental state. Arbor Day is a reminder of the importance of trees. Let’s find out more about it.

Why is Arbor Day named so?

The aim of Arbor Day is to encourage people around the world to recognize the importance of trees, nature and the environment in which we live. Trees are a very important part of life on earth. They make us breathe. The principle of photosynthesis has been around since primary school. Besides photosynthesis, it also provides a great environment for many animals in the forest, from the canopy to the roots. Trees and their living greenery have a proven positive psychological effect on mental health and well-being.

In the United States, Arbor Day is now most commonly celebrated on the last Friday in April, although some states have moved the date to coincide with the best weather for planting trees.  In the Czech Republic, International Arbor day falls on 20 October.

The theme for 2022 is “Forests and sustainable production and consumption”. The theme is taken from the United Nations Collaborative Partnership on Forests and has been used for this year’s celebration of International Arbor Day.

Julius Sterling Morton, an enthusiast of trees, is credited with creating Arbor Day. Many Americans who moved from the East to the barren plains saw the opportunity to have a garden of trees and flowers as evidence that an American-style culture had successfully colonized a new environment. The first Arbor Day was held in Nebraska on April 10, 1872. On that day, it is estimated that close to one million trees were planted. Arbor Day was made a recognized holiday in Nebraska in 1885. In recognition of Morton’s birthday, the event was moved up to April 22. Later, the idea spread to other continents. Only the celebration day varies based on the climate and the best time to grow trees.

In the Czech Republic the idea was introduced by the “Association of Ornamental Societies,” when the first significant Arbor Day event took place in early April 1906. Václav Větvička, a former director of the Charles University Botanical Garden, reintroduced the tradition in year 2000 after it had been put on hold during the communist regime. The first Arbor Day event was scheduled on October 20, as autumn is a suitable time to plant trees in our land area.

The importance of Arbor Day

Arbor Day acts as a reminder to respect human health and grow trees. It inspires people to pause in today’s prosperous society and pay attention to the beauty of Mother Nature by, for instance, just planting a tree. Trees are a vital source of life-giving oxygen in the air we breathe. In addition to offering shade, shelter, and acting as windbreaks, trees significantly reduce the need for heating and cooling throughout the hot summer and chilly winter months. In addition to providing fuel and building materials, trees can also protect crops from erosive weather and excessive sun exposure.

Trees have a significant role in carbon sequestration. Trees benefit from CO2, which is a significant cause of global warming, rather than harming the ecosystem. According to a recently published assessment by MAAP, the original Amazon forest ecosystem has lost 13.2% of its original area owing to deforestation and other factors. More than 85 million hectares (211 million acres) or almost one-tenth the size of the United States or China are covered by this.

How to celebrate the Arbor Day?

This holiday is customarily celebrated by many communities by planting trees and honoring the environment in other ways.

Look for strategies to improve your garden’s water efficiency. Think about watering plants with rainwater or choosing drought-tolerant plant species. You may also plan a local community nature clean-up day with your friends and neighbors. Additionally, some take advantage of this day to visit an arboretum or botanical garden. You can improve your health by going for a walk in a park while enjoying the beauty of natural greenery. If you don’t have time for either activity, you can at least donate to organizations that are focusing on reforesting the earth. You can buy a tree that they will then plant in the Amazon, for example. There are many ways how to contribute.

Morton’s words about Arbor Day resonate strongly today, as climate change becomes an increasing threat: “Other holidays lean on the past; Arbor Day suggests the future.”

It’s an opportunity to protect the trees we have and bring trees to places where they don’t exist. After all, where would we be without our trees?