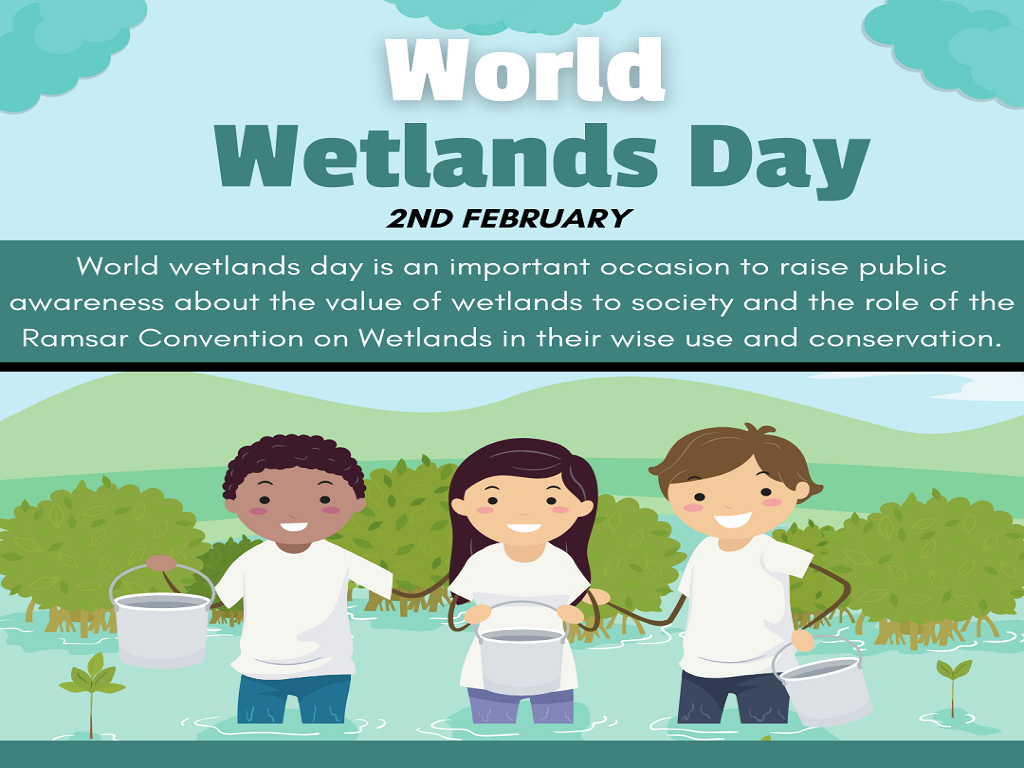 World wetlands day is observed on 2 February every year to promote awareness of wetlands. The convention on wetlands which was adopted as an international treaty in 1997 is also commemorated on this day.

Wetlands are vital ecosystems that contribute to biodiversity, climate mitigation and adaptation, freshwater availability, and other factors.

We must raise national and worldwide awareness about wetlands to halt their rapid destruction and stimulate conservation and restoration efforts. World wetlands day is an excellent opportunity to raise public awareness about these vital ecosystems.

World wetlands day is an environmental celebration that begun in 1971 when environmentalists gathered to reaffirm the commitment for protection of wetlands .

The Ramsar Convention’s broad goals are to halt the global loss of wetlands and conserve those that remain via prudent use and management. International cooperation, policy making, capacity building, and technology transfer are required for the protection of wetlands.

The theme for World Wetland Day 2022

‘Wetlands action for people and nature’ is the theme for the 2022 edition, and it emphasizes the necessity of activities that guarantee that wetlands are maintained and managed sustainably. It’s a call to aid in financial, human, and political resources to prevent the extinction of the world’s wetlands and to repair those that have been degraded.

Following its acceptance by the general assembly on August 30, 2021, world wetlands day will be marked as a United Nation’s international day for the first time on February 2, 2022.

Wetlands are a type of aquatic environment that  are found worldwide. A wetland is an area of land that is continually or seasonally saturated with water. Freshwater, brackish (partly salty), and saline wetlands (very salty) are the type of wetlands that exist in the world.

Wetlands are referred to as the earth’s kidneys because they filter water in the same way as your kidneys do. Sediments and contaminants stick to the bottom of a wetland as water flows through it, making the water cleaner. Wetlands also aid in reducing flooding and also prevents shoreline erosion.

Natural or artificial wetlands are the two type of wetlands that exist. Antarctica is the only continent on the planet that lacks natural wetlands. In metropolitan locations, artificial wetlands may be built for water management purposes. All wetlands have vegetation uniquely adapted to such moist conditions, which makes them distinctive. Wetland plants must be highly tolerant to damp soils.

There are generally four major types of wetlands

Marshes are characterized by standing water with emergent sedges and wild rice plants grown in them. The plants that grow in marshes differ depending on the depth of the water and the length of time during which plants remain flooded; some are only flooded periodically, while others have permanent standing water up to six feet depth.

Other wetland forms such as shrub swamps are frequently interspersed with marshes. They exist in regions where the water is deep enough to inhibit the establishment of trees and shrubs for a long enough time of the growing season.

Swamps are distinct from marshes in that woody plants often dominate them.

Swamps are often home to various birds, fish, and other small animals. Low-lying places near rivers or coastal areas such as the Everglades in Florida are home to swamps.

Swamps are divided into two types: wooded swamp and shrub swamps. Snakes, bobcats, alligators, beavers, and a wide variety of birds can all be found in swamps.

Bogs are distinguished by highly acidic waters, spongy peat deposits, and a sphagnum moss cover. Unlike marshes and swamps, bogs acquire their moisture from precipitation rather than waterways like streams or river runoff.

These wetlands are ideal for averting downstream floods because they absorb precipitation as it falls and limit the swelling of rivers and other waterways, Northern bogs and pocosins are the two types of bogs.

Fens are peat-forming wetlands, similar to bogs, but they acquire their moisture from groundwater rather than precipitation, making them significantly less acidic.

This means they sustain a broader range of biodiversity, including plants, fish, birds, and everything in between. Fens, like bogs are helpful because they can assist in avoiding land flooding by absorbing water from the ground and preventing it from leaking elsewhere.

Why are Wetlands Important?

Because there are so many types of wetlands, each has its own set of advantages. Although not all of them provide the same benefits to animal life, plant life, or even humans, they are all vital and it is critical to conserve them all.

Here are some of the benefits of wetlands:

These wetlands are becoming increasingly significant in metropolitan regions where development has increased the velocity and amount of stormwater runoff. Every year, catastrophic flooding occurs in many areas that have experienced extensive wetland loss.

Wetlands support many business activities. Blueberries, cranberries, and wild rice are just a few of the goods found in wetlands. In many instances, wetlands grasses are hayed for winter animal feed. Forest wetlands such as cedar swamps can give consistent quantities of valuable timber if managed and planned correctly. Many commercial operations such as peat mining, logging, cattle grazing, and cranberry production can significantly harm wetlands.

There is an alarming situation that  wetlands make up only around 5% of the lower 48 States. Thus there is a need of the hour to keep wetlands protected. Otherwise, we would lose endangered species.

Habitat for fishes and bird

The majority of freshwater fish are reliant on wetlands. Fish eat the food that is produced in wetlands. Many species use wetlands as a nursery habitat for their young and many significant sport fish spawn in or near wetlands.

Many bird species rely on wetlands for seasonal resting, nesting, feeding and protection  from predators.

Habitat for mammals and amphibians

Almost all amphibians especially those that reproduce are reliant on wetlands. Changes in wetland quality and quantity affect amphibians. Many experts have linked global amphibian population decreases to wetlands degradation.

Many mammals like to live in wetlands, such as the muskrat, beaver, otter, mink, and raccoon.

Although wetlands make up only around 6% of the Earth’s land surface, they are home to 40% of all plant and animal species.

The importance of wetland biodiversity was recently emphasized in the assessment report of Intergovernmental Science-Policy Platform on Biodiversity and Ecosystem Services (IPBES) on biodiversity and ecosystem services.

Wetlands were named the most endangered ecosystem in the survey, affecting 40% of the world’s plant and animal species that live or reproduce in wetlands.

Furthermore, the World Heritage and Ramsar Conventions estimate that 64 percent of the world’s wetlands have vanished since the turn of the century.

Wetlands are declining in most parts of the world, jeopardizing their benefits to humans.

It’s concerning that they’re rapidly vanishing due to human activities and climate change. According to the Global Wetland Outlook (GWO), wetlands are disappearing three times faster than natural forests.

Wetlands conservation is a critical human effort that can aid in achieving sustainable development goals by 2030.

Why is World Wetland Day Important?

World wetland day is essential for the following reasons:

On wetland day, we should emphasize the conservation of wetlands as they are depleting and being eliminated rapidly from the environment. If wetlands continued to be finished at this pace, disasters such as flooding would be common. There would be a loss of endangered species as wetlands are their home.

How to Celebrate World Wetlands Day?

To commemorate world wetlands day, take a look around your neighborhood to discover any wetlands. If there are, you’ll almost certainly find a group or agency in charge of them. There may be sponsored activities on this day. If you can’t locate any events in your neighborhood, why not hold one yourself? If you live near a wetland, you might want to visit it.

We know that wetlands occasionally feature pathways where you may walk and enjoy the green environment while reconnecting with nature. As you go, keep an eye out for the wetlands and you will realize that wetlands are indeed a gem.

You don’t want to go outside? Why not learn more about them and the problem of conservation while you’re at it? Sign petitions, call elected officials and meet individuals in your community who are also trying to make a difference. Most importantly, remember to commemorate world wetlands day.

Why do we commemorate world wetland day?

Every year on February 2nd, world wetlands day is commemorated. It is observed to promote global awareness of the importance of wetlands to people and the environment.

This day also marks the adoption of the wetlands convention on February 2, 1971, in the Iranian city of Ramsar on the Caspian Sea’s coasts.

When was the first time world wetlands day was celebrated?

In 1997, the first world wetlands day was commemorated. It also marks the signing of the Ramsar Convention on wetlands in the Iranian city of Ramsar in 1971.

Where is the world’s largest wetland?

The Pantanal, located in the center of South America, is the world’s largest tropical wetland. With 42 million acres, the Pantanal is somewhat larger than England and spans three countries: Bolivia, Brazil, and Paraguay.

What are the benefits of wetlands?

Wetlands give benefits that no other ecosystem can match, far from being useless, disease-ridden areas. Natural water quality improvement, flood protection, coastline erosion prevention, recreational and aesthetic opportunities, and free natural products are just a few of the benefits of wetlands.

Why is a wetland referred to as a natural kidney?

Wetlands are often called the “kidneys of the Earth” because they perform the same tasks as kidneys, absorbing pollutants such as nitrogen and phosphorus. Excess levels of these substances can cause toxic algal blooms and hypoxia.

Many wetlands worldwide have been severely degraded, posing a threat to biological variety and people’s livelihoods. As wetlands are a crucial part of our ecosystem, their depletion at this pace is an alarming sign.

World wetland day allows us to raise awareness about the importance of wetlands. We should join hands to conserve the remaining wetlands and protect them at every cost.

« Previous Post
« True or false? If your product can be used to do more than one job, content that talks about all of those jobs will be relevant to your customers.
Next Post »
Why are smarketing meetings an important part of a sales enablement strategy? »
« Previous Post
» Next Post