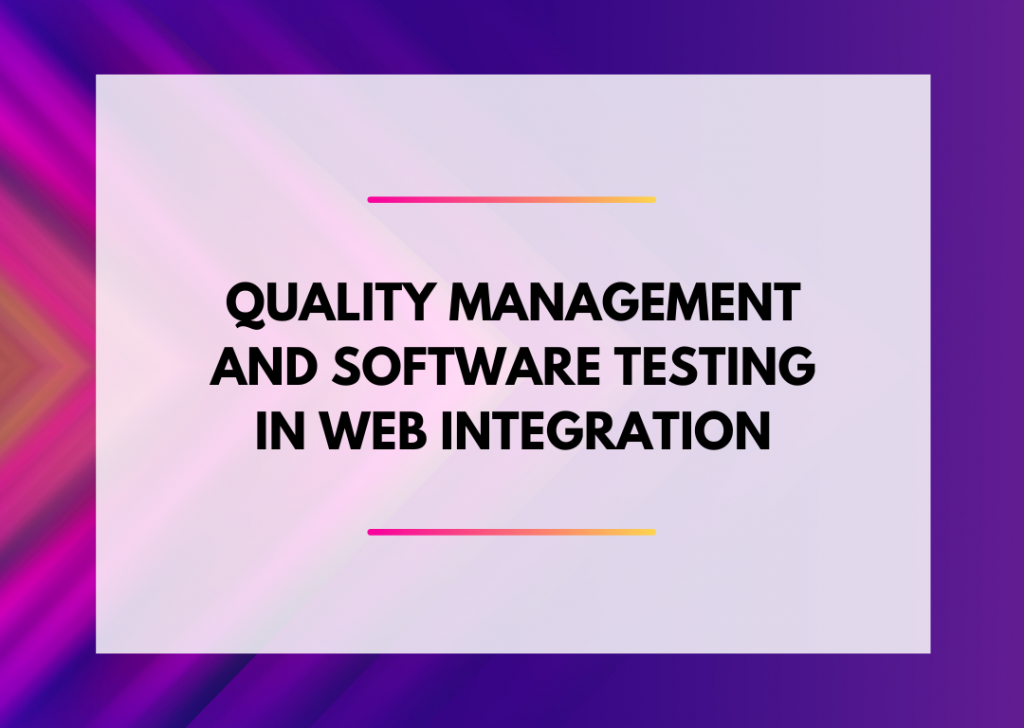 This article describes the basic concepts of “Quality assurance“ testing and their goals, and considers various types of testing.

The rapid development of information technology today has resulted in ever greater demands on the functionality of web (software) applications, and in turn on the quality their software. As a result, quality management must play a vital part in the process of developing web solutions.

What is quality assurance?

The Wikipedia definition of quality assurance is: “Quality assurance (QA) generally concerns everything from design, development, implementation and maintenance through to product development. The aim of this activity is to ensure that the outputs of individual parts meet the necessary quality standards, which have been defined beforehand.

Naturally, these steps also apply to web solutions, and specifically the main part of testing. In this area there is a need to take into account that new web pages are being tested and to accommodate a selection of appropriate tests, such as web application security, the ability to deal with huge numbers of visitors (performance testing), testing browser compatibility and operational systems, and accessibility for ordinary users as well as users with disabilities.

Testing is a systematic process, involving  observing system operation under specific conditions imitating a real-life environment. It is also focused on identifying errors, flaws and deviations from customer requests, and on operation in borderline situations from the perspective of output data, stress and security. Individual findings are similarly recorded and evaluated.

The goal of testing is to find errors as quickly as possible and at the lowest level of solution development, and then rectify them.

The concepts of Quality Assurance and testing are often confused, but as we have seen in the previous section, testing is just one part of the quality management process.

Literature and practice highlight a variety of testing methods, which depend on how the perspective from which we see them.

Based on the implementation method, we can divide the process into

Given the nature and focus of the testing itself, we can differentiate between:

From the source code perspective, this involves:

Depending on the approach to information, test can be described as:

Depending on which level of software development inspection takes place, we can divide testing into:

It is impossible to say which testing method is the best and most efficient. The choice of testing methodology depends on a range of factors, such as project size, goals and focus, capabilities and capacities of the customer and the testing team. However, putting together the right testing plan at the very beginning allows us not only to  improve the overall quality of the system, but also enables considerable financial savings.

Experience shows that it is much more effective to  prevent errors at the beginning of work than to rectify them at the end of the project. This is even more important when it comes to web integration, both for integrated systems and in the case of a mistake that occurs at one end of the chain and can spill over into another area, where it can cause a lot of damage. It is therefore a very good idea to carry out quality tests at every step of the software life cycle, beginning with the specific requirements of the customer and ending with putting the ready application into production.

It is very useful to carry out quality tests as early as the analysis and design phase of the solution because an error in the architecture design, an incorrect functional specification, or a poorly chosen graphic design can later cause many tests to fail. As a consequence, going live is significantly delayed.

It is a fact that testing cannot prove that the system has no error and so it cannot be regarded as faultless. However, an effort is made to be as near faultless as possible. This is doubly so for integrated systems, where there the risk of failure in the areas of security, communication and stability is greater.