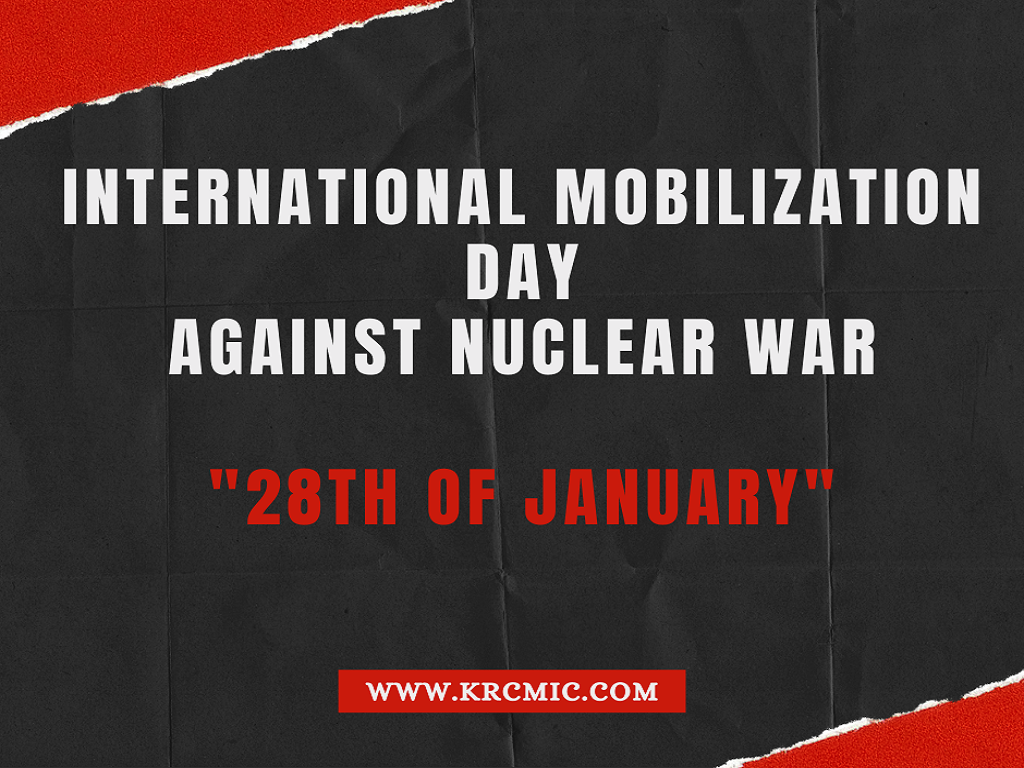 During the latter part of the twentieth century, nuclear weapons played a critical role in international security, and minute attention was given to their effects on humanity.

Despite fast advances in communications, transportation, and weaponry, no large-scale strategic conflict has occurred since World War II.

As the most destructive weapons, nuclear weapons are yet devised. January 28 is declared as International Mobilization Day against Nuclear War for awareness about the adverse effects of atomic weapons on humanity in the future.

Every year on January 28/29, the anniversary of the adoption of the Delhi declaration in 1985, the International Mobilization Day against Nuclear War is commemorated. The Delhi declaration was signed in 1985 in New Delhi, India’s capital, by India’s heads of state and government, Argentina, Greece, Mexico, Tanzania, and Sweden.

These were the first countries to sign the document. The declaration called for a halt to the nuclear arms race and the gradual dismantling of atomic arsenals worldwide. In 1945, the nuclear weapon was only used twice when two bombs were dropped on Nagasaki and Hiroshima. Even though nuclear weapons are no longer utilized, establishing a new atomic danger could pose a political threat to many countries.

In 1953, the USSR and the US agreed to a moratorium on nuclear testing in the atmosphere. However, the Soviet Union and the United States broke the suspension in 1961 and 1962, respectively. The United Nations Disarmament Commission drafted a treaty prohibiting nuclear tests in the atmosphere, outer space, and beneath the sea, signed by over 100 UN members, including the United States and the Soviet Union.

In 1968, a new non-proliferation treaty was signed, prohibiting all countries save the United States, Russia, France, the United Kingdom, and China from possessing nuclear weapons. One hundred eighty-one countries signed the treaty in the mid-1990s, and it was extended indefinitely in 1995.

Why is International Mobilization Day against Nuclear War Important?

The total prohibition and destruction of nuclear weapons, as well as the accomplishment of a nuclear-weapon-free world, will eliminate the threat of atomic weapons for all time, considerably improving international peace and security. The international mobilization day against nuclear war is celebrated to aware people of nuclear weapons and their adverse effects shortly to humanity.

On international mobilization day against nuclear war, the prohibition of nuclear weapons is emphasized. Many countries now possess nuclear weapons, but their use is prohibited. This is owing to the tragic events of 1945, when two bombs were dropped on the Japanese cities of Hiroshima and Nagasaki, killing thousands of people and leaving lasting impacts.

Nuclear weapons were created for humanity’s safety and defense. Still, slowly, people realized it was the biggest threat to society. Its use anytime can lead to the jeopardy of humanity, so this day is celebrated to support the elimination of nuclear weapons.

To Protect Our Environment

In the long run, the use of less than 1% of the world’s nuclear weapons might destabilize the global climate and threaten as many as two billion people with starvation in a nuclear famine. The United States and Russia both have thousands of atomic weapons, which might cause a nuclear winter, wiping out the critical ecosystems on which all life depends. So this day, we should insist on destroying atomic weapons as they can wipe the human race from this universe.

Ionizing radiation from nuclear weapons kills or sickens persons exposed to it, contaminates the environment, and has long-term health implications such as cancer and genetic damage. The widespread use of these chemicals in atmospheric testing has had severe long-term consequences. According to doctors, 2.4 million people died from cancer due to atmospheric nuclear testing conducted between 1945 and 1980.

Nuclear explosions have disastrous implications for the entire globe, with only a sliver of hope for protection. Radiation can do irreversible damage to both nature and human health. A large-scale nuclear conflict could result in a global climate calamity, destroying humanity as a result.

Nuclear weapons have been banned and completely non-proliferated for a long time. In 1968, the UN Non-Proliferation and Disarmament Committee signed a non-proliferation treaty. It had been confirmed by five major nuclear powers and 181 states by the mid-1990s.

However, 13 countries have refused to sign the treaty, including Israel, India, Pakistan, and Brazil. Except for five considerable nuclear powers, the non-proliferation pact prohibits all countries from obtaining nuclear weapons (the UK, China, Russia, the US, and France). Although this treaty was extended indefinitely in 1995, the non-proliferation regime is now on the verge of unraveling.

When is International Mobilization Day against Nuclear War Celebrated?

Every year on January 28/29, the anniversary of the adoption of the Delhi declaration in 1985, the international mobilization day against nuclear war is commemorated.

Why is International Mobilization Day against Nuclear War Celebrated on January 29?

When Was the First Nuclear Attack Occurred?

During World War II, an American B-29 bomber detonated the world’s first deployed atomic bomb over Hiroshima, Japan, on August 6, 1945.

What Were the Effects of Bombing in Japanese Cities?

The explosion killed an estimated 80,000 people on the spot, with tens of thousands more dying later from radiation poisoning. Three days later, a second B-29 dropped another A-bomb on Nagasaki, killing an estimated 40,000 people.

Japan’s Emperor Hirohito announced his country’s unconditional surrender in World War II in a radio address on August 15, stressing the devastating power of “a new and most ruthless bomb.”

What Will Be the After effects of Nuclear War?

Nuclear explosions have both immediate and long-term consequences. Within seconds or minutes of a nuclear detonation, blast, thermal radiation, and rapid ionizing radiation cause tremendous destruction.

Delay effects, such as radioactive fallout and other environmental consequences, cause harm over long, lasting from hours to years.

A nuclear war could result in firestorms, a nuclear winter, widespread radiation sickness from fallout, and the temporary (if not permanent) loss of much modern technology owing to electromagnetic pulses, in addition to the rapid devastation of cities by nuclear bombs.

Some scientists, like Alan Robock, believe that a thermonuclear conflict could lead to the extinction of modern civilization on Earth, owing to a long-term nuclear winter. According to one model, Earth’s average temperature after a total thermonuclear war drops by 7 to 8 degrees Celsius (13 to 15 degrees Fahrenheit) on average for several years.

According to early Cold War research, billions of people would survive the immediate impacts of nuclear bombs and radiation in the event of a worldwide thermonuclear war.

According to some researchers, atomic war could indirectly contribute to human extinction through secondary effects such as environmental damage, societal disintegration, and economic collapse.

Furthermore, it has been suggested that even a small-scale nuclear exchange between India and Pakistan, using 100 Hiroshima yield (15 kilotons) bombs, might result in a nuclear winter, killing over a billion people.

On the anniversary of the adoption of the Delhi declaration, which aims to call for an end to the nuclear arms race, the world’s nuclear arsenals to be phased out, and the threat of nuclear war to be eliminated, the international day of mobilization against nuclear war is commemorated around the world. Adopting the declaration on principles of a weapon-free and non-violent world is the basis for today’s holiday.