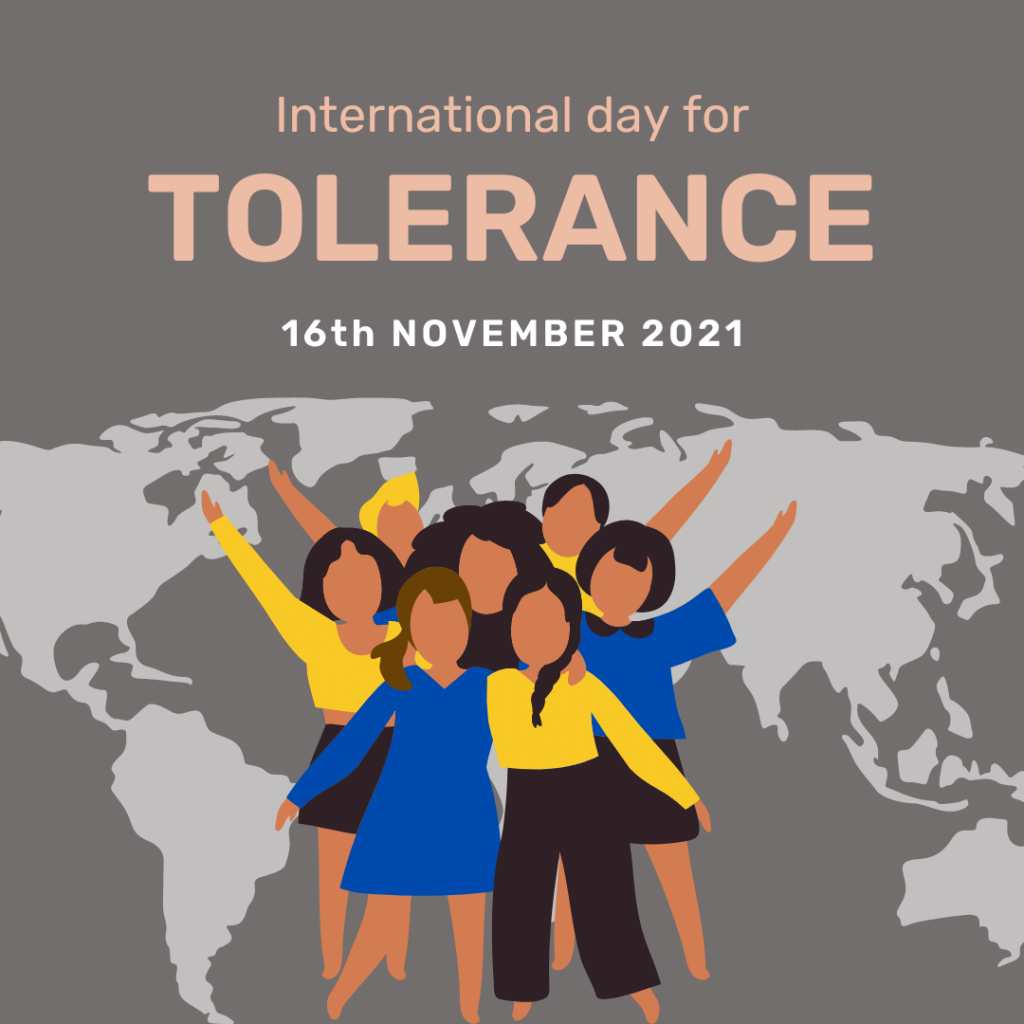 The International Day of Tolerance reminds us that everyone around us deserves to be treated with dignity. People that disagree with one another can coexist happily. It is known as tolerance. Tolerance is the most effective means of ensuring the survival of various individuals and mixed communities. In today’s metropolitan cities, we associate tolerance with people of different religions, but also with people of different races, ethnicities, and so on. Tolerance is more crucial than ever in a society when violent extremism and contempt for human life is rapidly becoming the new reality. Tolerance acknowledges others’ universal human rights and fundamental freedom. On November 16, International Tolerance Day, consider the last time you had a different point of view than one of your friends. We’re guessing that wasn’t that long ago. Look up the date that commemorates open-mindedness and showing respect.

Why is International Day for Tolerance named so?

The United Nations declared it to encourage global tolerance and to emphasize the various cultures and peoples. To unite the world, one must first comprehend others and be tolerant of those who are different. The International Day of Tolerance, observed annually on November 16th, raises awareness of the consequences of intolerance. This is a fundamental principle of UN values, essential to upholding both the UN Charter and the UN Declaration of Human Rights.

When is International Day for Tolerance 2022?

What is the theme of International Day for Tolerance 2022?

There is no specified theme for International Day of Tolerance. The overall focus of the day is to encourage people to see tolerance as a tool for bringing the globe together. This day is a good reminder to respect, accept, and embrace the rich diversity of our worldwide cultures, arts, modes of expression, and so on, and that human development would not be possible unless we all worked together.

“Tolerance is an expression of humanity that must be cultivated and lived in our lives every day so that we can rejoice in the diversity that strengthens us and the values that unite us.”- UNESCO Director-General Audrey Azoulay.

History of International Day for Tolerance

The year 1995 was proclaimed “The Year of Tolerance” by the UN. On November 16 of that year, all UNESCO Member States adopted the Declaration on Tolerance. The organization had been established fifty years prior to this day. To promote tolerance as a vital component of society, the UN General Assembly established the day of tolerance on November 16, 1996. After the UN General Assembly passed Resolution 51/95, which designated November 16 as the International Day for Tolerance, it occurred in the same year.

UN Declaration of the Principles on Tolerance, 16 November 1995

In the declaration, it is stated, among other things, that tolerance is not the same as consent or indifference. The great diversity of the cultures, modes of expression, and human ways that make up our globe is respected and acknowledged. This document stated that six steps must be implemented to effectively promote tolerance:

1. The definition of tolerance

According to the declaration, tolerance is defined as “respect, acceptance, and appreciation of the rich diversity of our world’s cultures, forms of expression, and ways of being human.” This necessitates an active acceptance of all others, acknowledging the natural diversity of the global population, and permitting different groups to coexist peacefully as they are.

Tolerance at the state level necessitates just and impartial legislation, ensuring that chances are available to all people without discrimination and that no societies are excluded or marginalized.

This suggests that action should be conducted on a national and state level, including at the level of the family, community, schools, and universities, in the media, and in various social organizations. It also necessitates that vulnerable groups receive special attention, appropriate social protection, and networking efforts in order for the international community to effectively address this challenge. For example, root causes of social inequality must be examined in order to advance the social dimension of acceptance.

The UN considers education to be a “urgent imperative” because it is believed to be the most effective method of preventing intolerance. The UN argues that education should be used to teach people about their fundamental liberties, combat forces that encourage fear and exclusion, and help them to develop the capacity for independent judgment. As a result, the UN is directly dedicated to supporting research and educational initiatives that advance teacher preparation, curricula, and the informational content of educational materials and technologies, all of which are targeted at promoting tolerance.

5. A dedication to preventing intolerance

As stated by the UN, we must dedicate ourselves to spreading the values of tolerance and nonviolence in academia, the sciences, culture, and communication.

6. The goal of the International Day for Tolerance is to spread the values of tolerance across the world

The 16th of November was designated as the annual International Day for Tolerance under this last tenet, which was established to raise awareness of the virtues of tolerance and the threat of intolerance for all groups and societies.

However, UNESCO has also created awards for those who have made outstanding contributions to advancing the spirit of toleration or non-violence in a variety of sectors, including science, culture, and the arts. Its goal is to recognize individuals—women, men, institutions, other bodies, or non-governmental organizations—who have excelled in advancing tolerance and nonviolence and have shown leadership in this area. Tolerance is recognized by the UNESCO-Madanjeet Singh Prize and the UNESCO International Day for Tolerance as a fundamental human right.

The Award was created in 1995 to commemorate both the 125th birthday of Mahatma Gandhi and the United Nations Year of Tolerance. It retains the name of its founder Madanjeet Singh, an Indian artist, writer, and diplomat who served as a UNESCO Goodwill Ambassador.

The award is given every two years on 16 November, the annual International Day of Tolerance. A ceremony is held on this occasion, and the victor is given a check for $100,000.
Franca Ma-ih Sulem Yong from Cameroon received it in 2022. Franca Ma-ih Sulem Yong has worked to change how mental illness is seen and reflected in society for the past seven years as a journalist. She received training in both art therapy and psychology and went on to start and lead two non-profit organizations, including the Afrogiveness Movement (#Afrogiveness) and Positive Youths Africa (PYA). The award will be presented to her at a ceremony on November 15 at the UNESCO headquarters in Paris.

The importance of International Day for Tolerance

The importance of the International Day of Tolerance stems from the fact that, despite significant progress, more has to be done to counter intolerance worldwide. On days like this, it helps to actively contribute to the elimination of intolerance by raising awareness and disseminating education. Accepting that there are societies and groups that are unlike our own does not constitute tolerance. It is a bigger problem that involves building a harmonious society that fairly and consciously includes everyone while ensuring that nobody leads a life that harms others around them. To live peacefully in the modern, worldwide society, tolerance is necessary in all aspects of life. Here are some illustrations of tolerance:

How to celebrate International Day for Tolerance?

Human rights advocates, educators, and other worldwide organizations utilize this day to raise awareness of the value of tolerance. Some people discuss how intolerance has impacted their life in essays or short fiction. Institutions, groups, and people that have significantly contributed to tolerance and nonviolence are given the UNESCO-Madanjeet Singh Prize for the Promotion of Tolerance and Non-Violence.

You can join in by taking a moment to consider instances in which you acted intolerantly. Consider how you might conduct differently today. Read about various ethnicities or cultures. This is one of the finest methods to increase awareness of other intolerances around the world while also assisting in the reduction of any hidden intolerances you may have. It’s possible that you frequently need to become conscious of tolerance before you can celebrate it. A excellent method to broaden your viewpoint and have a better understanding of the world and its perceptions is to listen to others. The only way to distinguish between intolerance and tolerance is by paying closer attention to those who may have been affected by intolerance and hearing what they have to say. Discuss issues such as human rights, tolerance and intolerance with friends and family. Everything said above seems like a fantastic reason to have a party for your loved ones, friends, or even your neighbors. Alternately, consider what you can do to advance tolerance in your neighborhood, state, and nation.

The following questions may help you to think about the topic more in depth:

Don’t forget to use the hashtag #InternationalDayForTolerance when posting about this day on social media!