On May 25th, the update of the core algorithm of Google was announced. However, on June 9th, this Google SEO update has officially been completed.

It is confirmed by Google itself that the upgrading of the core algorithm that began on May 25 has officially been completed. Now, this helps you to accurately analyze the situation you are in.

Google announced the completion of the update at exactly 3: 44 a.m. EST. However, you may have started to notice some of the Google SEO updates 2022 effects before the big announcement.

It’s possible that you got hit by the Core Update of May 2022, if you continue to observe the same pattern in the changes you notice. 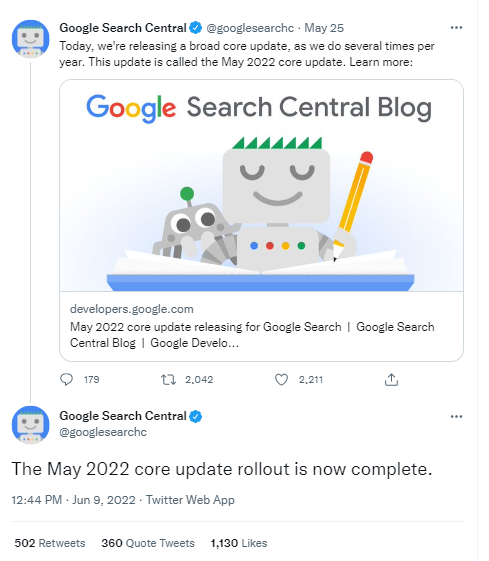 What can you do next?

As a result of Google latest update for SEO, you may see some positive changes as well as negative. If you’re encountering only positive changes, good for you! The update didn’t crush you. Phew!

However, if you’re sensing some negative changes, you need to do something about it. Here’s what you can do.

Google gives the same advice whenever there is a new update in the market, which is to improve your content.

In October, the Search Advocate of Google stated that:

“With the core updates, we don’t focus so much on just individual issues, but rather the relevance of the website overall.

And that can include things like the usability, and the ads on a page, but it’s essentially the website overall.”

A special tip for you. If you’re planning on recovering from the new update, don’t get mingled up with technical fixes or making little improvements, such as replacing your old title tag with something new. This just won’t cut it.

Seems quite overwhelming, doesn’t it? I mean changing the entire website?! How long will it take? So many questions must be rummaging around your head. But this daunting task can be fulfilled with the help of AI content generators.

But you need to be very cautious if you decide to go down this road because it can be quite a bumpy ride.

All the search engines get affected by the new Google SEO update to some extent. However, the effect may be more prominent in some areas as compared to others.

It can be too early to say such a thing for sure but our analysis suggests that the new Google SEO update particularly tackled the AI-generated content.

Below mentioned is an example of a site owner who shows a considerable decrease in traffic after the new Google SEO update. The content on this guy’s website was AI-generated. 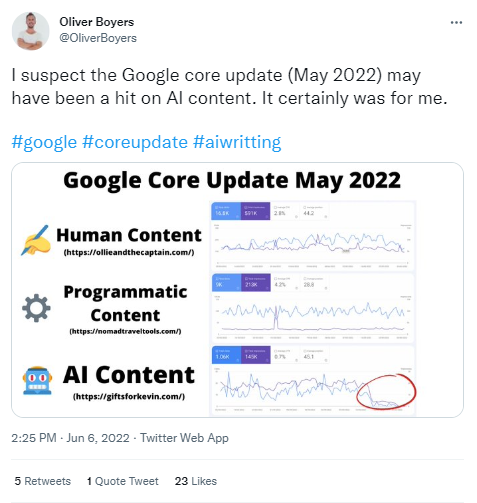 On the contrary, the below-mentioned evidence demonstrates an increase in traffic after the Google SEO update 2022.

The site owners that his site resides in the niche that is “polluted with garbage AI content”, and he has finally managed to leave his competitors behind. 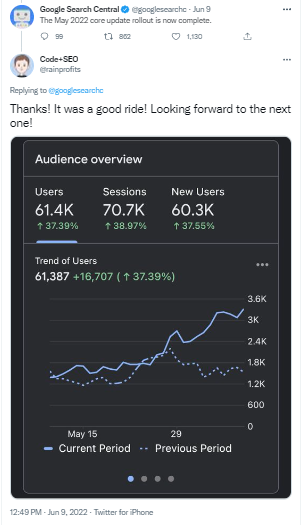 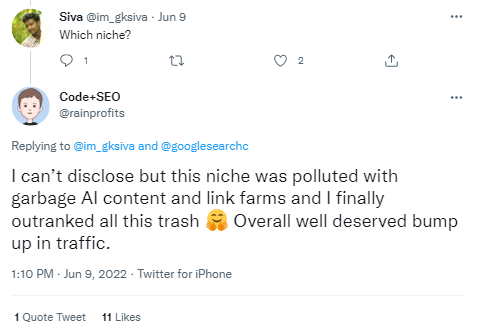 Here are Google’s remarks on this situation.

What opinion does Google hold about the content generated from AI?

According to Google, the content generated from AI goes against its guidelines only when that content is used to manipulate the search results.

If the AI-generated content continues to rank lower after the new Google SEO update of 2022, it will mean that the content was going against Google’s guidelines.

From all this notion, we can say that Google has found a way to differentiate the AI-generated content based on adding value and manipulating rankings.

It is generally believed that the performance of the AI-generated content sparks when it is being used as a supplement to the content written by human writers.

You can also checkout the Google SEO algorithm updates history from 2017-2022.

My keyword ranking fall down after this update. Is it happened because of this update

I see my clients website fall down today. This was disaster.